This video is based on my Storyboard for my presentation to staff for my Design Challenge Statement.  I kept to my plan pretty well, almost slide for slide instructions and narration notes, except of course that I don’t have any of the photos and video (specific to my school) I had planned for my storyboard because I haven’t had kids in the library yet, media permission forms aren’t in yet, and there just hasn’t been a chance to do that.  I did my slides on Google Slides.

Instead, I used a couple pictures I already had on my phone from last school year of our space, stock photos, and the videos that I wanted to include that are from other people (which were in my original plan).

A change I made to my storyboard for this final product was that I originally thought I wanted background music. After replying to one of my classmates about the fact that I am distracted by background music when narrators are speaking, I decided not to include music for mine.

For the audio, I had planned on using Screencastify, but realized that wouldn’t work because I would be limited to 10 min.  Instead, I used Simple Screen Recorder.  I really liked this one.  It has a simple ctrl-alt-R to start and ctrl-alt-R to pause or stop.

Due to the transition issues I was having in my editing and compiling video using “Open Shot” and the fact that I couldn’t get iMovie on my iPad without the IMS department doing an upgrade on my iPad to 11.2, I used yet another editing program called KDENLIVE.  It is more ‘upscale’, and for experienced video editors (which I am NOT).  It isn’t trying to be user-friendly at all.  The only reason I used it, is that I couldn’t use “Open Shot” or “iMovie”, so I had an in-house tutorial on how to use KDENLIVE from my husband.  It was great, don’t get me wrong.  It’s just not something I would be using with K-5, and therefore am not suggesting as a recommendation to classmates.

Within my video are 3 videos from other people that I would include in my presentation to my staff, but feel free to skip those if you just want to see my slides and the parts that I did myself.

I decided to name my LLC “The Imagination Station”.

This module of the course has been a whirl wind of a learning curve.  With the exception of the tiniest bit of iMovie familiarity (which I didn’t use, regretfully), everything was new.  Green Screen software, Podcasting, Video Editing,  Screencasting, good tips for taking good video recordings, Storyboarding, Soundbooths, were all explored.  There was a lot of frustration along the way, but it also opened the door to new possibilities.  Without this course, I may have tried one or two of these things, but this forced me to dive in to many aspects of media arts.

Media Art is so exciting for students.  The new way of teaching is all about students showing us what they learned the way that they want to demonstrate that, rather than us telling them the end result that we would like to see.  The more ways we teach them to express their learning, the more choice they have.

Integrating media arts into our teaching helps us to move up the SAMR model to redefine tasks and transform learning.

Right click the image and choose view image to see it larger, or click on the link here.

When I interviewed my staff regarding how the library is used and what they need from their LLC, physical layout changes were not at the fore front.  We have wheeled furniture.  We have different kinds of seating.  We have storage.  We have open areas.  The circulation desk oversees all areas of the library.  We have quiet spaces.  The desires of the staff revolved around things we don’t have and things we have been discussing that we would like to have such as a portable maker-configuration, specifically.  So, my design challenge was not about redesigning the whole library.  That already happened.  My design challenge was-

Create a maker-configuration that is a portable treasure trove of engaging, hands-on materials and tools, providing meaningful exploration of ADST through design thinking for teacher and students.

What this means is that my photos don’t illustrate the possibilities for a library redesign, but rather they illustrate smaller changes we can make to enhance the redesign that already occurred.

The photos and write-ups are separated into the four points that need to be supported:

The image below represents the updated portion of my Design Challenge plan.  You can right click on the image and choose ‘view image’, or you can visit the link, here.  If you visit the link, you may need to scroll down to see the additions made. 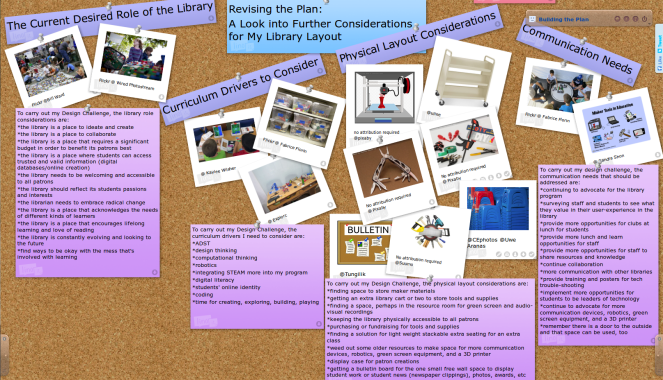 Based on my Design Challenge Statement from a previous post, I have developed a Linoit Board to get started on this goal toward creating a portable maker-configuration for my school. 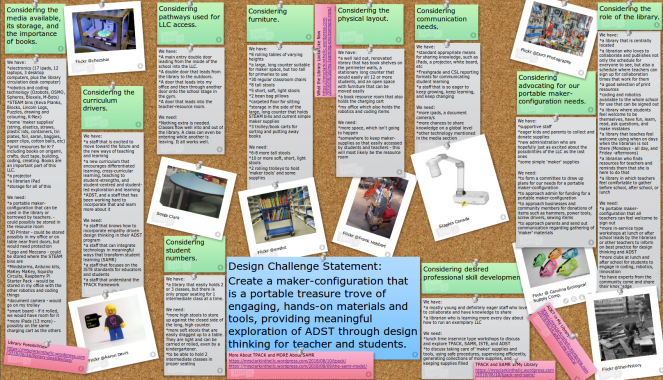 And if you can’t quite see it, here’s a link…

Building the Plan Linoit Board

Mrs Clark in the LLC